'A' for Uncle Earnest

The writer is director of the National Neuroscience Institute. 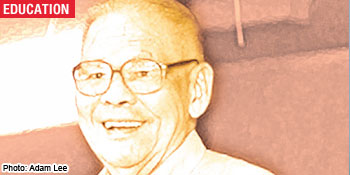 I attended Nanyang primary and secondary schools up to Secondary 4. Chinese was the medium of instruction for all the subjects in these schools.

After Sec 4, I switched to Raffles Institution (RI) in preparation for entering medical school. Much as I was sorry to leave my Nanyang friends, I was relieved of the strain of studying science subjects and mathematics using English textbooks while the teachers taught in Chinese. As I knew I was going to study medicine, I thought I should learn to cope with scientific English while in pre-university.

When I left Nanyang, I was a balanced bilingual student, equally at home in English and Chinese. My mother, a Cambridge-trained lawyer, spoke English to me and corrected any mistakes I made. Hence my command of English was as good as that of my peers in RI. My years in Nanyang had ensured that I was fairly well informed about Chinese history and culture, but I was largely ignorant of the history and culture of the rest of the world.

My first contact with the General Paper (GP) was after my admission to RI. I was warned by my friends in RI that GP was the stumbling block for many a science student. Often the spoiler in a string of straight 'As', it demanded more than a good command of English to do well in.

After my first GP class, I realised that I lacked knowledge in many areas that my Chinese science stream education had not touched on. So for the two years that I was in pre-university at RI, I spent every Wednesday afternoon at my Uncle Earnest's house for tuition.

Mr Earnest Lau had married my mother's younger sister. A beloved history teacher at Anglo-Chinese School, he had graduated from Oberlin College, a liberal arts college in Ohio, the United States, then read history at Balliol College, Oxford University.

Tuition lessons with Uncle Earnest were very different from what happened in class. His purpose was not simply to help me pass or score well in the GP exam. His aim was to widen my horizons. If, by the way, I also aced my GP paper, that was to be a bonus.

Each week, he would recommend topics for me to read up on so that we could discuss them the following week. We covered the history of great civilisations as well as current affairs. Our discussions were always interesting and the tuition was fun for both of us.

I not only learnt about countries and events with which my Chinese education had not familiarised me, but more importantly, I also learnt to view a topic or a problem from different angles.

Getting the right answer was not enough. I learnt to question conventional wisdom, and approach each new problem with a fresh mind. I was not worried about making a mistake, nor did I necessarily follow conventional rules. I learnt that any given problem may have more than one solution, each with its pros and cons. My task was to select the best solution, given the circumstances.

Mid-way through our discussion, my aunt, who was a wonderful cook, would produce tea with her homemade lemon chiffon cake, the best I have ever eaten, or a wide variety of kueh-kueh. This was as important a part of my lesson as the learning of facts and concepts. It also gave Uncle Earnest and me a break from our intense discussions.

I always ended each lesson with a sense of satisfaction, for not only had I enjoyed myself, but I had also acquired new concepts. I always looked forward to reading up on the topics Uncle Earnest had set me, and of course looked forward to the next session.

The way GP was taught at RI, I felt I was merely being coached to pass examinations, and that put me off. My seat in class was in the first row. The GP teacher could see me doing non-GP work under her nose. I am grateful she pretended not to notice my disobedience.

What's the purpose of GP?

As I was writing this article, I e-mailed an officer in the Ministry of Education to ask the purpose of making all A-level students take GP. She explained that the purpose of GP was to stimulate critical thinking and foster an ability to express one's views clearly and concisely across a wide variety of subjects as well as to argue a case cogently. While Uncle Earnest did not explicitly state that these were his aims, he achieved them in the most mentally stimulating and enjoyable way.

When the A-level results were announced, I found I had scored an A1 for GP. I was happy to show Uncle Earnest that his teaching had not been in vain. But both he and I knew that the score was less important than the learning process through which he had widened my horizons.

More than 35 years later, I still remember much of my discussions with Uncle Earnest. I also remember with sadness my aunt, who was not only a great baker but also a kind-hearted teacher and subsequently a much-beloved principal of Anglo-Chinese Junior School. She died when I was a fourth-year medical student.

I visited her daily during lunch time when she was warded at the Singapore General Hospital. She stoically put up with the pain and disability her illness caused. She taught me more about life by her actions than any formal course of study could have. I remember to this day those lessons.

I can only wish all our students could be exposed to a teacher like my Uncle Earnest. But teachers like him are rare. My tuition sessions with him took place in 1971 and 1972. The experience I gained with and through him was worth more than any prize I won in the course of my educational career.

I was not competing with others. Instead I was getting a rounded education that would serve me well long after the medals or trophies I won had tarnished.